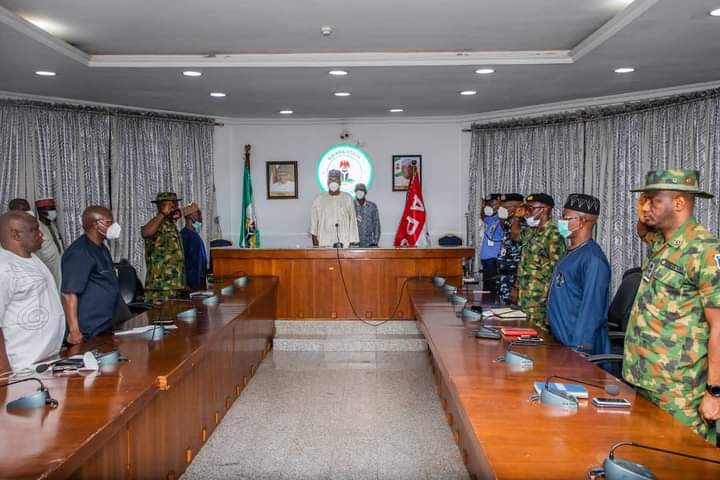 Kwara State Governor , AbdulRahman AbdulRazaq has disclosed that a joint military operation between Kwara and Niger States will hold this week to comb the forests and dislodge criminal elements.

This was part of the highlights of the state security council meeting held on Monday by the state executive council and commanders of various security agencies in the state.

Other highlights of the Security Council meeting was the upcoming joint security meeting between Niger and Kwara States to curtail kidnapping,banditry and other crimes.

The council also said that a military operation will hold this week in the forests between the two states with the goal of dislodging and clearing criminal elements from the area by denying them safe harbour.

The council also discussed proposed regulations of specific transport operators in synergy with their umbrella bodies to curb crimes, as well as renewed efforts of the administration to reposition Operation Harmony to improve the mobility and joint operations among the security forces.

The Governor briefed the council about the national strategies to tackle the farmers-herders’ crisis such as ranching and its funding under the National Livestock Transformation Programme, and the need for Nigerians to live in peace and harmony and respect one another’s economic rights.

He said there are renewed efforts to douse the tension between herders and farmers through initiatives that would gradually phase out open grazing in exchange for permanent settlement for the herders.

AbdulRazaq said the government will continue to engage all stakeholders to maintain peace and harmony between the two economic groups in the state.

Commending the security agencies for their proactive steps, the Governor also said the hijaab question is being tackled through engagements with stakeholders from the Muslim and Christian communities.

He said another engagement is slated for Tuesday to firm up government’s position on the issue.

Attended by the Governor, Deputy Governor Kayode Alabi, and other members of the council, highlights of the meeting included an upcoming joint security meeting between Kwara and Niger States to curtail kidnapping, banditry and other crimes,