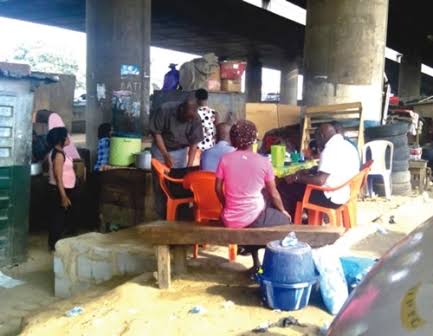 Minister of Works and Housing, Mr Babatunde Fashola has given traders and other illegal occupants of the under-bridges in Lagos to vacate before March 31 or face forceful eviction and sanctions.

The quit notice was conveyed by the Director, Highways, Bridges and Design, Mr Oluropo Oyetade.

He gave the ultimatum during an emergency meeting between Federal Ministry of Works delegation and Lagos State Government officials to review the Apongbon Bridge fire on Wednesday.

Fire fighters battled frantically to put out the inferno under the Apongbon Bridge on Wednesday morning.

“I was about to enter a meeting concerning the Third Mainland Bridge before I was hurriedly ordered by the Honourable Minister to come here to give his directive and mandate that he has given to me, to announce that the area (Apongbon Bridge fire) should be cordoned off, which we have done.

“And that the inspection of the defects caused by this inferno shall be taken immediately the place cools down.

”But the most important that I must deliver here is that, all the occupants under our bridges particularly in Lagos, we are giving them seven days to pack away.

“Seven days counting from today. By 31st of March, the task force will swing into action and we will impound all recalcitrant elements that we find under the bridges.

“They shall be forcefully evicted. Not only that, they will be made to pay for any items we have to remove.

“Let me repeat and make myself clear, all occupants under our bridges, we have over 20 bridges in Lagos, should move before 31st of March,” he said.

He warned that a task force would embark on enforcement of recovery of the Right of Way (RoW) on all the 20 bridges in Lagos as from March 31.

Oyetade said that a contract was already on for the rehabilitation of the Apongbon Bridge, which repairs had not been concluded only for the same bridge to be gutted by fire.

He described the damage to Apongbon Bridge as an avoidable incident.

According to him, the government cannot continue to build and allow irresponsible attitude of Nigerians to damage such infrastructure built with huge resources.

The director said that all Federal Controllers of Works had been directed to clear encroachers on all bridges nationwide, while lamenting similar fire incidences to bridges in Ajaokuta and Kano State recently.

He also condemned the activities of illegal sand dredgers that removed the soil under the Third Mainland Bridge, to jeopardise the safety of the infrastructure.

Oyetade said that three companies had been arrested in connection with this development and would be prosecuted.

The director said he was to hold a meeting with the National Inland Waterways Authority (NIWA) in Abuja to discuss issues of regulation of the sand dredgers, but had to run down to Lagos to attend to the Apongbon Bridge fire.

He told journalists that the Apongbon fire was massive and that traffic architecture was being drawn up between his engineers and the Lagos State officials on best possible diversion options.

The Lagos State Commissioner for Transportation, Mr Frederick Oladeinde, said his ministry would issue a release on diversion alternatives to the public after consultations.

Oladeinde said that the Apongbon Bridge fire would negatively impact traffic, adding that a combined team of traffic regulatory agencies were on ground to manage a traffic architecture to be drawn to reduce the hardship on road users.

The Commissioners of the Lagos State Ministries of Environment; Physical Planning and Urban Development, as well as Heads of various Lagos safety regulatory and emergency management agencies, also took turns to advise the public and announce safety, health and traffic measures.