Victims Of NAF Plane Crash Laid To Rest In Abuja 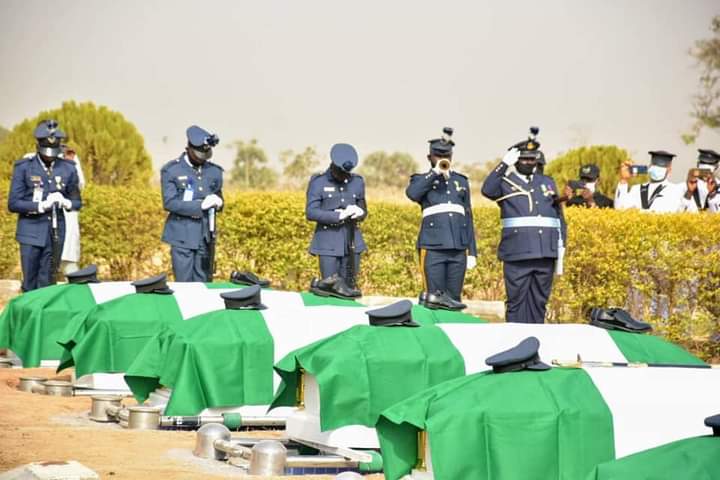 The Nigerian Air Force (NAF) on Thursday, laid to rest the remains of 7 of its personnel who died on 21 February 2021 in an air crash involving a NAF Beechcraft King Air B350i aircraft in Abuja.

The burial ceremony, which was conducted with full military honours, was held at the National Military Cemetery, Abuja with restricted attendance in compliance with COVID-19 protocols.

Speaking at the Ceremony, the Chief of the Air Staff (CAS), Air Vice Marshal Oladayo Amao, stated that the NAF was still in palpable shock and intense grief over the loss of the gallant and courageous heroes, in whom, he said, the Service had so much confidence.

“We salute the supreme sacrifice of these young men, whose lot it became to give their lives in the defence of the peace which we all enjoy and often take for granted”, he added.

The CAS noted that their death was a huge loss to the NAF family and indeed the entire Country, stating that they would be greatly missed but fondly remembered for their invaluable services to the Nation and humanity.

He remarked further that the young officers and airmen flew their quota of ongoing surveillance missions in the North East, North West and more recently in the North Central over Niger State and its environs in connection with the concerted efforts to secure the release of the staff and students abducted from the Government Science College Kagara, Niger State.

Speaking further, the CAS stated that the loss of the confident and professional young officers and airmen must spur the rest of the personnel not only to rededicate themselves to the service of the Nation, but also to resolve that they would relentlessly expose and fight all agents of destabilisation and extremism in the society.

According to him, “we must throw everything that we have into this fight, to ensure that our departed colleagues did not die in vain.”

While praying for the peaceful repose of the souls of the fallen heroes, AVM Amao condoled all NAF personnel, the families of the deceased and the entire Nation, whom, he said, the late personnel represented and fought earnestly to protect.

The CAS further restated the commitment and unalloyed loyalty of the NAF to the Commander-in-Chief of the Armed Forces of Nigeria, President Muhammadu Buhari, in his efforts at tackling the security challenges facing the Nation.

Key moments of the solemn event were the presentation of National Colours to the deceased’s Next-of-Kins by the CAS, laying of wreaths by dignitaries and the wife of Flying Officer Micheal Okpara, Mrs Chioma Okpara, as well as the customary 21-Gun Salute and rendition of “the Last Post”. The Faith service was earlier conducted by Group Captain (Reverend) Dogo Gani, Director Chaplaincy (Protestant) Headquarters NAF and Group Captain (Reverend) Philip Kwasau, Director Chaplaincy (Roman Catholic) Headquarters NAF before the caskets were lowered into the graves.